3. In the footsteps of Sigeric

This morning I walked from Liguria into Tuscany. Sounds impressive, no? But it was all of 4km ! But then I continued for a total of 17km from Sarzana to the towns of Fosdinovo and Caniparola and return, a six hour excursion. 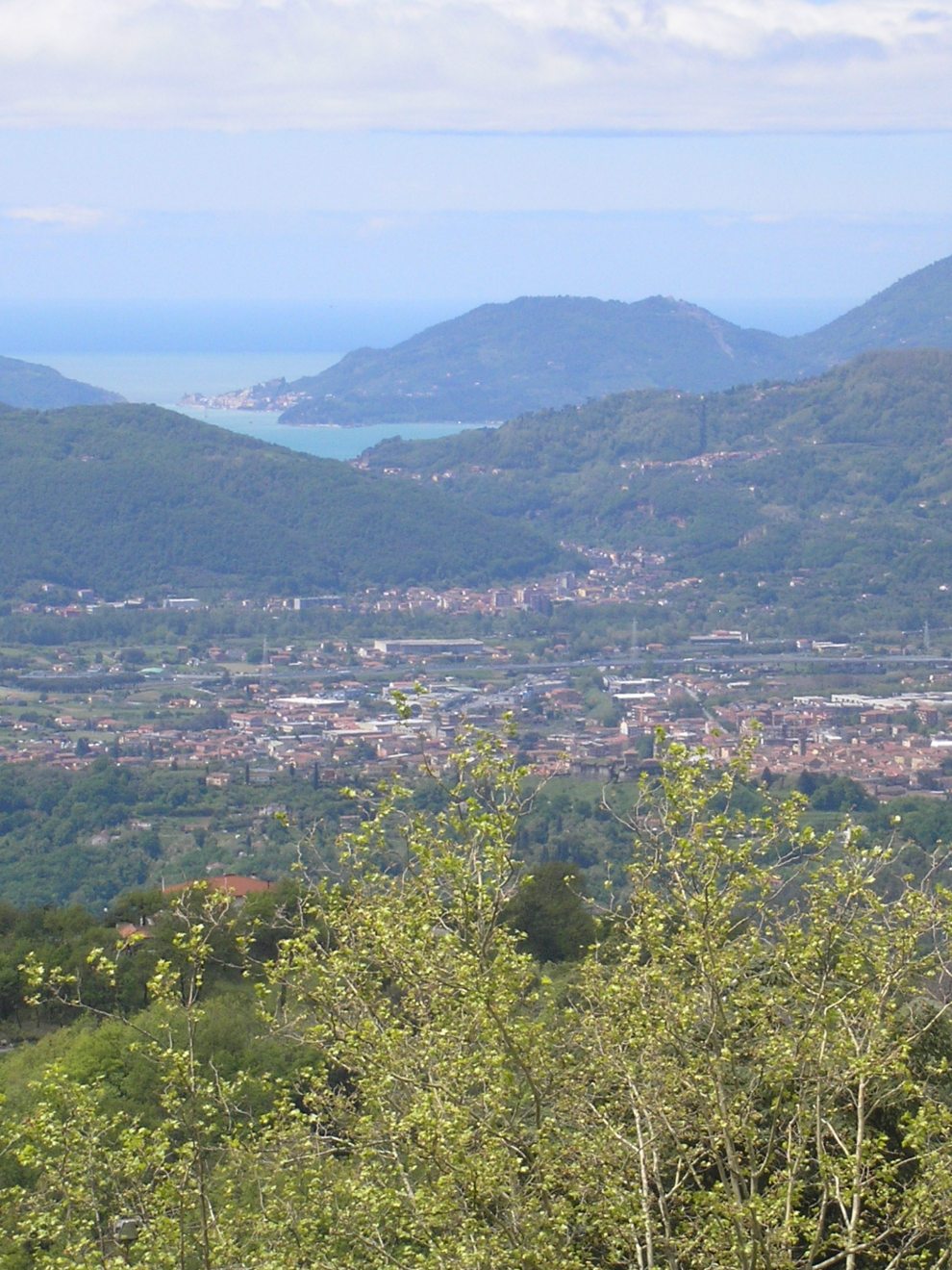 Make no mistake, I love Australia – the land of my birth, life and (probably) death (who can tell?), but I have lived 65 years there, and in all the sum of those years have never seen such beauty as in just a 2 hour walk from Sarzana to Fosdinovo. It is a steep climb, 400m in 6km with four or five cruel little sections, but at almost any time you can stand still, rotate 360°, and see vista after vista that delights. This particular view looks across the valley of the Magra River to the Gulf of La Spezia, the Ligurian Sea and the beautiful town of Portovenere on its promontory.

In Italy, as in “England’s green and pleasant land”, the beauty comes from the overlay, the interaction, of human activity onto the landscape. It is a form of sculpture, crafted over thousands of years by women and men who owed their lives to the land but also who in turn gently transformed it to better meet their needs. They did it in a natural, sensitive, and sustainable way, learned over millennia; they did not pillage, so there is a gentleness.

In Australia it seems to me that we have swung between pendulum points of being either passively subjected to the forces of nature or by ruthlessly or at least unknowingly exploiting the land. But certainly we had a less nurturing palette to begin with – “the wide brown land” in general tends to have thin soils and little water.

There has been a day and a half of rain since I arrived, and every crevice, every slope, is running with water in this mountainous terrain. Trickle joins trickle to form what the Italians call torrenti, not necessarily ‘torrents’ as we understand the word but anything from two trickles up to and including a catastrophic flood. It depends.

So, who is Sigeric and his feet? The Via Francigena (hereafter VF – it’s a mouthful) pilgrim route was made famous by Chaucer’s Canterbury Tales but was first written up by Sigeric the Serious (!), the then Saxon Archbishop of Canterbury on his return from Rome in about 990. I get the impression he was seriously smart, not stupidly serious – well I hope so anyway.

I first walked a short section of the VF in 2010 in an excursion with the Club Alpino Italia and my fascination began with this then little-known activity. In the nine years since, the Italians have become alert to the spin-off from the Spanish camino di Santiago experience and are cashing in big time. Last year about 2 500 people walked parts of the VF compared with about 280 000 in Spain. I think that’s what’s called a “growth potential” in a trashed economy.

The last section of my walk today, the 4.5km from Caniparola back to Sarzana was, in fact, the reverse direction of that very first walk back in 2010.

One response to “3. In the footsteps of Sigeric”