6. A piece of cake, then more music 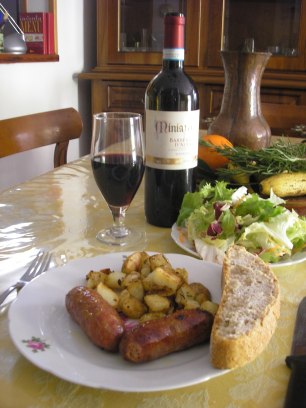 After my delicious Sunday lunch (OK, it’s just sausages and chips!), I had turned in for a post-prandial nap (here charmingly called un pisolino). From outside my fuzzy, mind-wandering dozing, I heard a “ooo-ooo” noise. A bird? Snapping back to consciousness I realised it was someone at my (open) front door. There was Grazia, my host, asking me if I would like to come and have “a little slice of cake” with them. Her brother Gino had just arrived so, as a party was materialising before my eyes, I of course agreed. (Now Grazia had given me another “little slice of cake” a couple of days ago, so I realised she was a bit of a culinary goddess.)

I walked up the stairs to their little garden where Alfredo and Gino were sitting at a table. The day was “variable” as they say. Some sun for a while, then overcast, then windy, a drop or two of rain – all that within a space of ten minutes. We all remarked how weird the weather was, but otherwise ignored it. The conversation was great, never a pause, seamlessly drifting from topic to topic. Grazia came out with her “cake” fresh from the oven – it was the classic Italian crostata, an apricot tart crossed with a lattice of more pastry. She proudly announced (and indicated) that the apricots were from HER garden.

Just as the tart was being cut, Alfredo opened a bottle of Sardinian prosecco – so already this was more than just a slice of cake. The tart LOOKED so perfect, absolutely perfectly made and presented, just the right amount of caramelisation, a deep rich colour. But then the TASTE! Mama mia! It was to the palate as to the eye, deep and rich and ….. just perfect.

(I realise I just used the word ‘perfect’ three times in three lines – very bad writing, but that’s just the way it is).

As I was nibbling (and that’s what I was doing, I never wanted it to end) my piece of tarty perfection, Alfredo produced a little bottle of limoncello, proudly telling me that the lemons were from HIS tree. Grazia noticed my forlorn expression as the last crumb was licked from my fingers and graciously cut me another slice. Gino, not wanting to be outdone, then produced a little bottle of his home-made Plum Liquor (I immediately wondered if he had plum trees in HIS garden – probably).

At 4 o’clock I regretfully retired because I had a concert at 5. It would take me 20 minutes to walk there, so that left me 30 minutes to continue my nap – which I felt I badly needed, even more so now after all the unexpected accompaniments to that “little slice of cake”!

Atrium of the Palazzo Remedi,

I had marked four events this afternoon, but the last two were a clash on which I had to make a choice. I arrived for the first concert – again in the atrium of a palazzo as I described before. This time it was Palazzo Remedi in Sarzana’s main piazza, and it was baroque music for harpsichord by Bohm, Vivaldi, Purcell, and Forqueray. The performance was competent but not more, but the venue was a dream – absolutely suited to the music and probably from much the same era.

The second was in the same venue after a 45 minute break (which I spent just mooching around the city centre). Now this was really something – a presentation of Corelli’s version of a Follia, a standard early music form of theme and variations. It was played by flute, cello and harpsichord.

This performance was excellent especially, as I have observed, in this beautiful, intimate (6m x 6m) highly acoustic space before an audience of about 30 people. What a privilege to be here.

As I walked out of the building, I was now faced with a choice of my final concert for the festival – both modern compositions, one for soprano and piano, the other flute and piano. They each were to begin in an hour; it was still only 6:30. Eeny-meeny-miny-mo.

The truth was that …… the ½ bottle of Barbera for lunch, the Sardinian prosecco, the limoncello, the slivovitz triumphed. I didn’t think I could last another hour, and there was a sneaking suspicion that neither of the two final concerts could top the Corelli. With a light heart but heavy feet I walked home.

Each night here I have gone to bed about 9 o’clock while there is still light in the sky. But here it is not from depression or escapism as it might be at home – no, it is because I am living each day to the full. I get into bed each night SO weary, but also so happy. Whilst I am still recalling the days’ events, I fall quickly and peacefully asleep until dawn. Pace.

One response to “6. A piece of cake, then more music”