Again, thank you very much to those of you giving me such nice feedback and encouraging me to write again after two years of blockage. I did rather attack Italy in my first week’s enthusiasm and am now having a couple of days of less activity, so perhaps I can turn my mind to some more creative or reflective writing – some of which I share today.

The whirrrrr of a coasting bicycle coming from behind me, gliding down the gentle slope of via Bradia. I resist the urge to turn and see who it is, then instantly regret it as I am passed by a woman of a certain age – not young – well-dressed. I have a ¼ view of an ear and her hair, but whatever sadness comes from not observing a lovely face is assuaged completely by a soft trail of her scent, the loveliest of perfumes, that I enjoy for many paces in her wake.

Midday resting in Piazza Matteotti. The sounding of a first single bell presages a swelling as all the bells of Sarzana, both sacred and secular, join in in praise of both God and the hour.

At exactly that moment a gaggle of high school kids pass by my position and, like a flock of finches, there arrive one, then five, then thirty in a communal crescendo that, having peaked, begins its symmetrical diminuendo of teenage chatter. The last bell and the last student fall silent together. The hour has passed. Et in terra, pax.

My constant question here: Is there a historian of Sarzana?

The constant reply: There was, but he died. 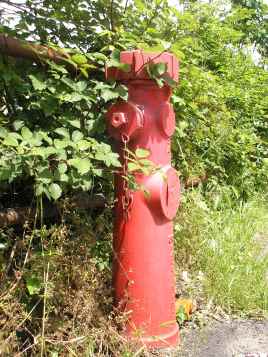 Do you remember a post from Day 1 wherein I giggled at Italian bureaucracy for erecting a hydrant sign bigger than the hydrant itself? On closer inspection there is metodo in their mad-a-nezza.

Today is roughly halfway between the Spring equinox and the Summer solstice. My bet is that in six weeks’ time the sign’s raison d’être will be molto claro!

Regarding my fascination with Vezzio the Butcher, Maria Grazia confirmed what Roxana at the grocery had said, although she softened it a bit to “un po’ strano – a little bit odd”. When pressed, all she could say to back that up was that he liked to talk (did that mean “gossip”?) and that he had a very short, very fat wife .

And there was I thinking that maybe he cut up small domestic animals for his delicious sausages or that the local parents warned their children not to suck their thumbs or old Vezzio would cut them off (their thumbs, that is). Apparently neither.

But my investigation will continue.

One response to “7. Glimpses of Sarzana”